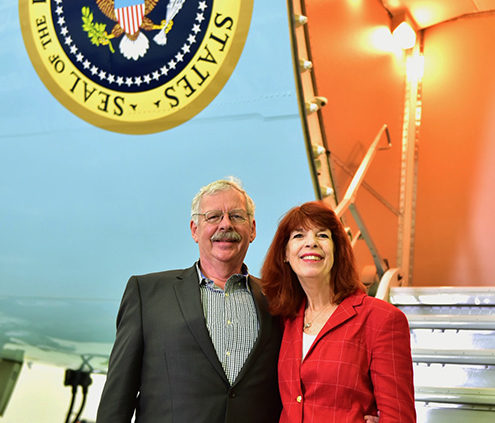 Last June, Joan and I were invited to attend the Change of Command Ceremony for the Air Force One Commanding Officer. The ceremony took place in the Air Force One Complex at Joint Base Andrews.  They had the formal Change of Command Ceremony, then a very nice luncheon for everybody. During the luncheon, SAM 29000, one of the two 747s, was right there, towering over us in the hangar. It was a little surreal with such an iconic aircraft being the backdrop for our linch. All of the Air Force one crews and maintainers were there with us. They all seem to really like their jobs and they are all great people who are quite motivated to do their jobs at the highest levels, and they do just that. It was a very special day!

Both Air Force One 747s, (properly called VC-25As) are gleaming examples of just how nice an airplane can look, even as it get along in its years. Inside, they are both nicely appointed, but not extravagant. They are much more business like than the general public would think. The interior has not changed since they both went into service quite a few years ago. There is even a slight Southwest motif to the interior, once again not what you would call plush.

Both Air Force One 747s are virtually identical to each other. The easiest way to tell the difference between the two 747s is the tail number. The first one is SAM 28000 with the slightly newer one being SAM 29000.